As the anniversary of Tom Thomson’s passing approaches, writer Bill Farnsworth heads out to paddle in the legend’s wake.

2017 marks the 100th anniversary of the (mysterious) death of Canadian artist and icon Tom Thomson on Canoe Lake in Algonquin Provincial Park, where he’d spent a great deal of time painting and sketching works that would inspire the members of the Group of Seven. To this day, Thomson’s death is shrouded in mystery, and Canoe Lake remains one of the most popular access points in the park. I had paddled it many times, but I had never stopped to investigate many of the sites that pertain to Thomson’s life. With this looming anniversary in mind, my girlfriend and I decided to discover more about this most Canadian of tales. 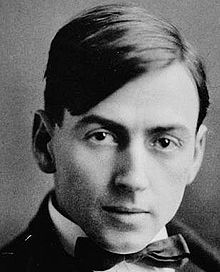 We wanted to experience as much of the history of both Thomson and the lake as we could fit into a single day. Armed with a simple map (you can get maps from outfitters) and several hours worth of research, we headed for the park on an overcast Sunday morning. We rented a canoe from The Portage Store, which is located directly at the Canoe Lake access point. The friendly and knowledgeable staff had us outfitted and on our way in no time.

While the morning sky was grey and foreboding, the temperature was perfect for paddling. Following our map, we paddled past the spot where Thomson’s overturned canoe was found, on July 8, 1917, behind Big Wapomeo Island. Next we passed the approximate location where his body was discovered floating eight days later. Thomson had been a strong and accomplished paddler, and we wondered aloud at what could have transpired to cause him to flip his canoe and drown, while sharing the many theories for this shocking occurrence. 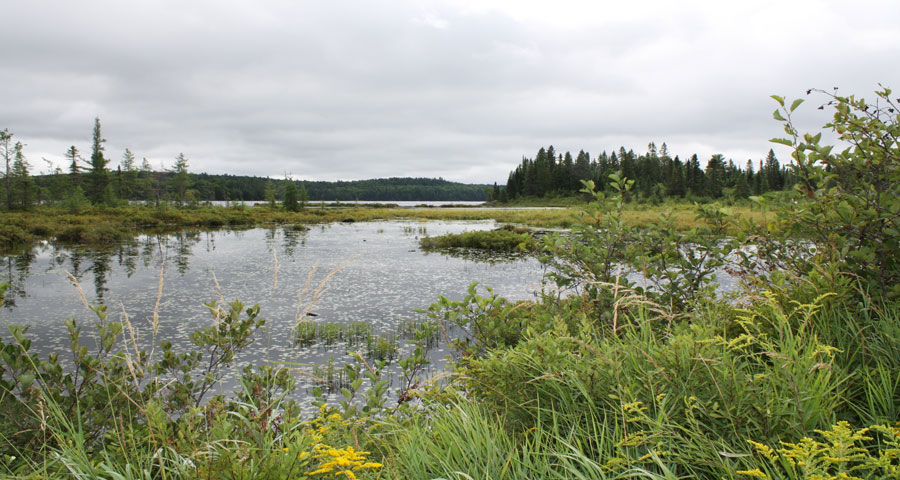 After a relatively short but invigorating paddle we approached the area that was once the Gilmour Lumber Company’s chip yard. At one time filling a space of ten acres, the chip yard was where loggers would use broad axes to square the giant red and white pine logs. While this procedure wasted almost half of each log’s wood, the timber’s square shape made it easier to pack into great ships that would carry the lumber to Britain. The water level has risen significantly in the years since the yard was abandoned, and what remains is a shallow, marshy area. As we paddled toward shore, the tangled remnants of those great trees could clearly be seen under the clear water. 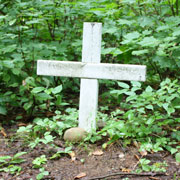 Our first stop on the tour was the graveyard that potentially contains Thomson’s remains. The location of his final resting place is one of the most contentious aspects of his mysterious death.

In his recent book titled “Northern Light,” Canadian author Roy MacGrogor makes a strong case that Thomson’s body does indeed rest in the little cemetery north of where the Mowat Lodge once stood.

We tied our canoe near the cottage road that is still in use today to access several cottages, many of them dating back to Thomson’s lifetime. Staying to the right at the road’s junction, a seemingly out of place birch tree marks the beginning of the path to the cemetery. While the trail was somewhat overgrown, it was easy enough to follow and within ten minutes we were greeted by an eerie sight. 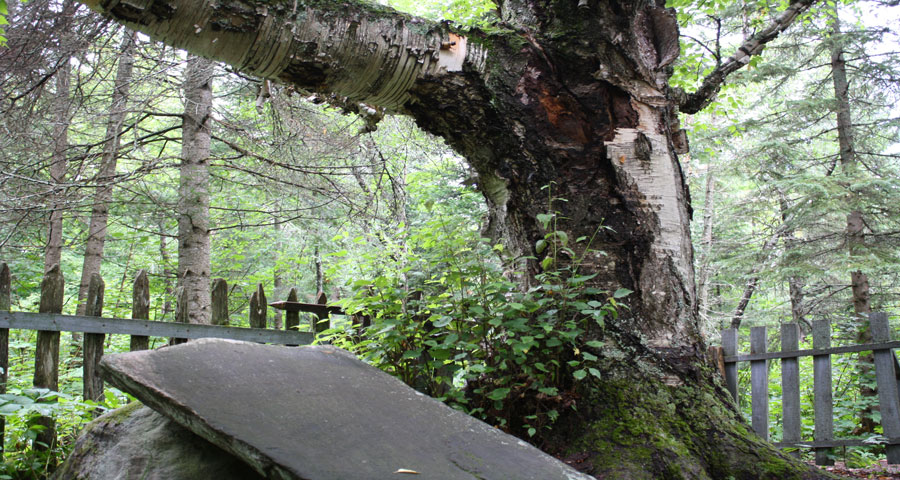 The cemetery is surrounded by an old wooden fence and dominated by the largest birch tree I’ve ever encountered. Within the fencing are the graves of just two men, while outside rests a plain white cross. It is this cross that was apparently created to mark Thomson’s grave, and his body may still rest in its vicinity. The grey light filtered through the massive birch’s foliage to cast tangled shadows over the cross and headstones within the fencing, lending an appropriately mysterious atmosphere to the setting. After a short time of reflection, we headed back down the trail to see if we could discover any remains of the two Mowat lodges.

In its prime the town of Mowat housed more than 600 people, most of them employed by the timber trade. The original Mowat Lodge was built as a boarding house for Gilmour Lumber employees, but it burned to the ground in 1920. A second lodge was built nearby, but it suffered the same fate in a fire ten years later. Our search for evidence of these lodges was foiled due to the change in water level, but we were able to look out over the lake and enjoy a similar view to what those original workers must have enjoyed from their lodging. 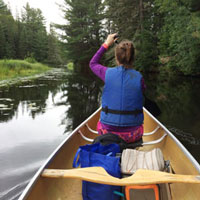 Next we paddled further up the lake into Potter’s Creek in search of the site of Canoe Lake Station, where visitors disembarked from the railroad before travelling south to Mowat. About halfway up the creek we passed beside the remnants of an old trestle bridge. With some of the original bridge foundation still visible above the water we couldn’t help but marvel at the engineering and construction that was completed almost entirely by hand.

The creek narrowed and we found ourselves paddling through a channel that wound through a dense expanse of lily pads and vegetation. After paddling under the now restored railway bridge we exited the canoe and began our search.

The railway tracks were removed in 1959, and the railway bed has been converted to a road that gives access to both Camp Arowhon and the Arowhon Pines Resort. After searching both sides of the road we discovered a level area that likely housed the station, but there were no traces of the structure to be found.

The next leg of our adventure involved a quiet paddle and portage into Joe Lake, where we went searching for evidence of the Hotel Algonquin. The hotel had been situated on a hill overlooking Joe Lake, set back from the railroad. This time our search was more successful. The hotel and surrounding buildings were demolished in 1957 as part of a policy to return Algonquin Park to its natural state. However, we were able to discover a couple of sections of stone foundations, some rusted pipes and a collection of old cans, bottles and porcelain. It was amazing to see just how much the trees had grown up in the 60 years since the hotel’s destruction. 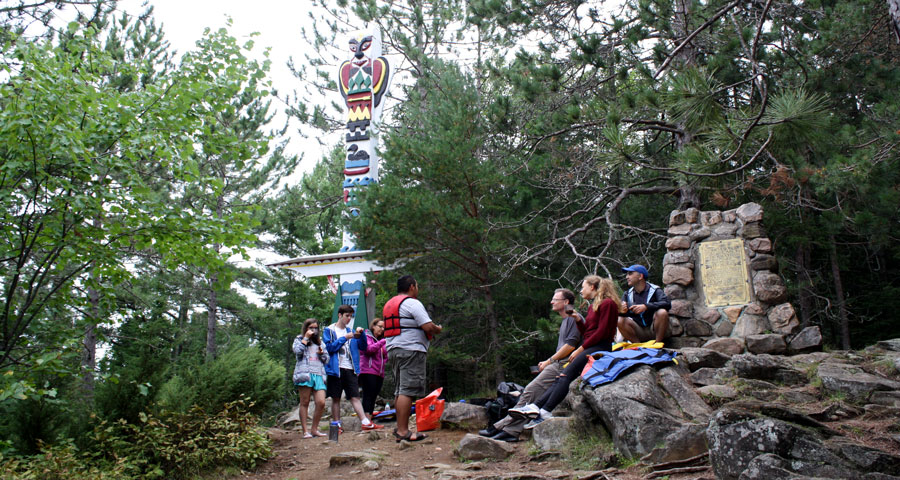 The final stop on our Tom Thomson tour was the site
of the cairn and totem pole erected in his honour. 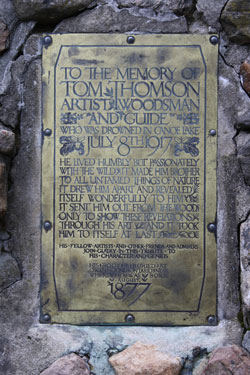 Situated on a hill overlooking the lake, the site chosen was a favourite campsite of Thomson’s. Today there is a public dock where we tethered our canoe and walked the short trail up to the site. We encountered a tour group from Europe with a guide who was sharing the mystery surrounding Thomson’s death (always an opportunity to lean in and listen!).

The stone cairn stands almost four feet tall, on which is mounted a bronze plaque. The epitaph engraved upon the plaque was written by J. E. H. MacDonald, a friend of Thomson’s and a founding member of the Group of Seven. It reads, in part, “To the memory of Tom Thomson, artist, woodsman and guide, who was drowned in Canoe Lake July 8th, 1917.” The 25-foot totem pole was carved with images and symbols representing Thomson’s life, and solemnly stands watch over the area of the lake where Thomson’s canoe and body were found.

After a last period of contemplation about Thomson’s life and the mystery surrounding his death, we got back into the canoe for the return leg of our journey. Passing the small lighthouse that stands just north of Popcorn Island, we were greeted by a large loon unfazed by our presence. After watching the magnificent bird dive and resurface several times we paddled back to The Portage Store.

We had successfully navigated the length of the lake and witnessed firsthand most of the important sites representing Tom’s life and death on those same waters. With weary shoulders and high spirits we drove back to Huntsville, Muskoka (where Thomson also spent time), reflecting on what life in Algonquin must have been like a century ago and the legacy that Tom Thomson left us – including a thirst for art, outdoor adventure, and a satisfied curiosity. 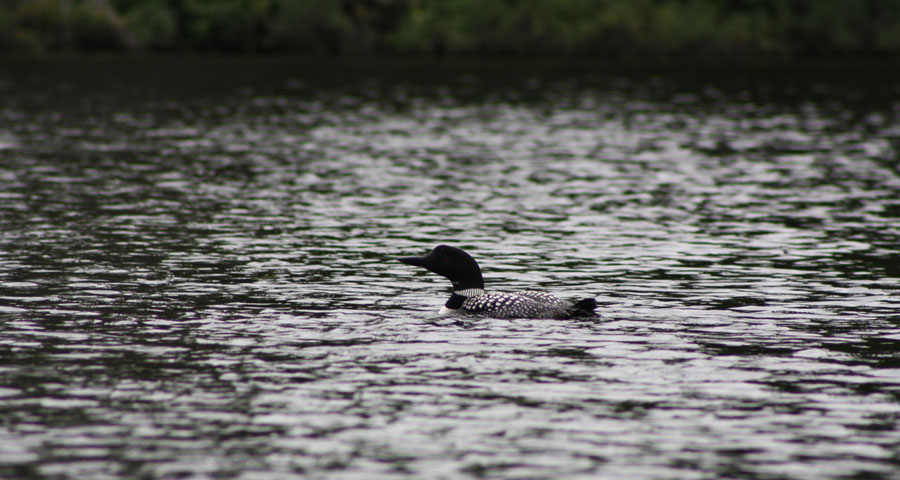 Want to find out more about the art of Thomson and The Group of Seven? Be sure to take a tour of The Group of Seven Outdoor Gallery. Created in 1997, this unique gallery is a collection of huge Group of Seven painting replicas reproduced on large outdoor murals that are displayed around Huntsville, Dwight, Dorset and Algonquin Park. With more than 90 murals currently on display, plan a weekend and explore the Gallery and surrounding communities. (Listen to Artistic Director Gerry Lantaigne in this video.)

Looking to head out on your own paddling adventure? Click here for a listing of outfitters in the great Canadian wilderness.

To plan your stay in the region, click here. 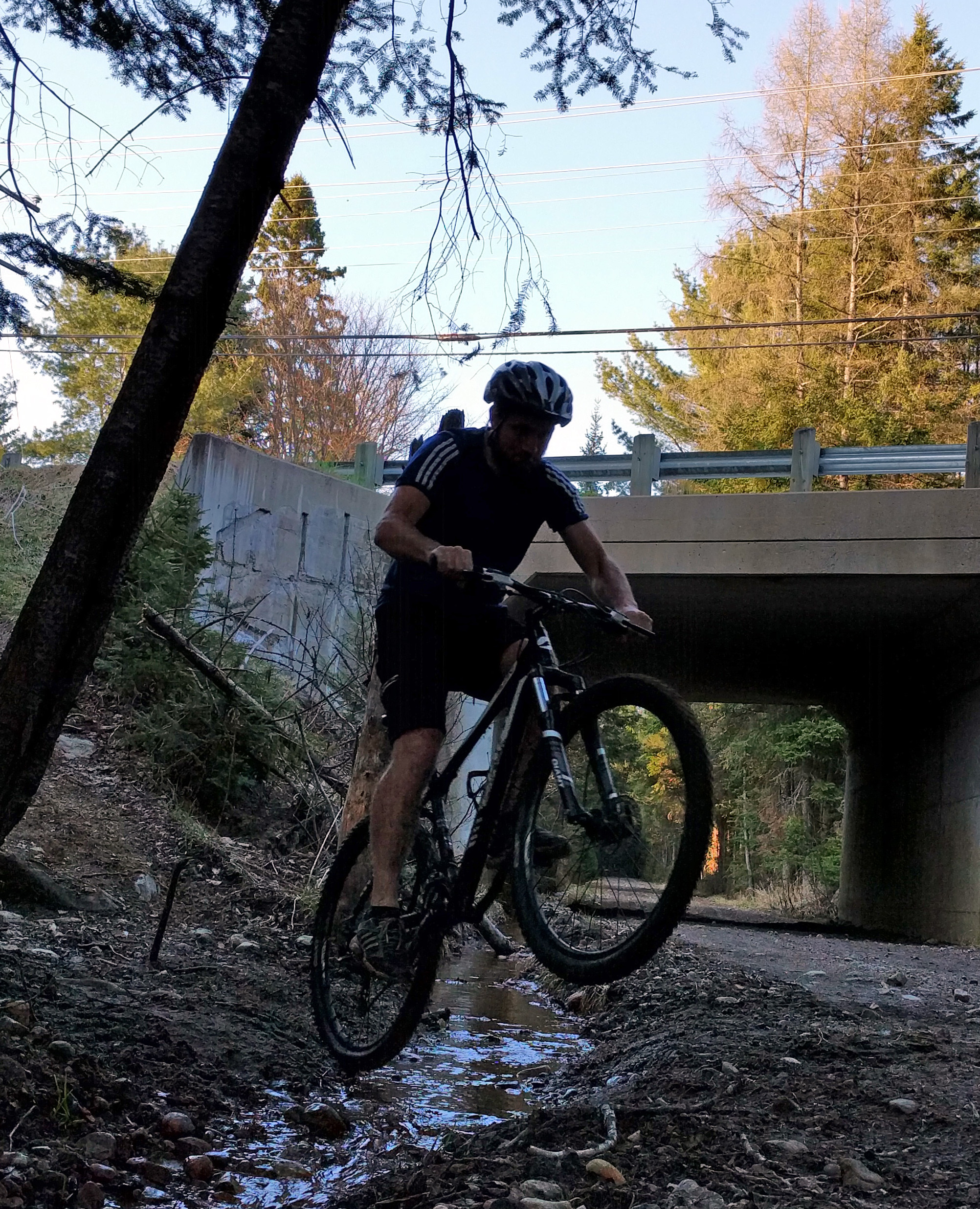 Bill Farnsworth is a freelance writer who has lived in Muskoka for more than 30 years.  When not writing, Bill can be found cycling, running, paddling and trying to keep up with his two adventurous boys.