Writer and outdoor adventurer Bill Farnsworth heads to the Almaguin Highlands of Ontario – north of Muskoka and west of Algonquin Park – to paddle the beautiful Magnetawan River.

For several weeks I had been looking at maps and researching online to find a river where I could create an epic, full-day paddling adventure. There are so many incredible options within the great Canadian wilderness, from within Algonquin Park to the French River, that finding the right one took some effort. While I wanted road access in order to put in and take out our canoes, I also wanted to find a secluded route that would not be crowded on a sunny Saturday.

My personal definition of adventure is when, at a certain point in the journey, you are not entirely sure that you are going to be able to complete the trip as planned. For me, that ruled out a straight downriver paddle, and lead me instead to a 15 km stretch of the Magnetawan River.  And in my initial research, I discovered the that “The Mag” has at least six sets of rapids that would need to be portaged around – the perfect degree of challenge. 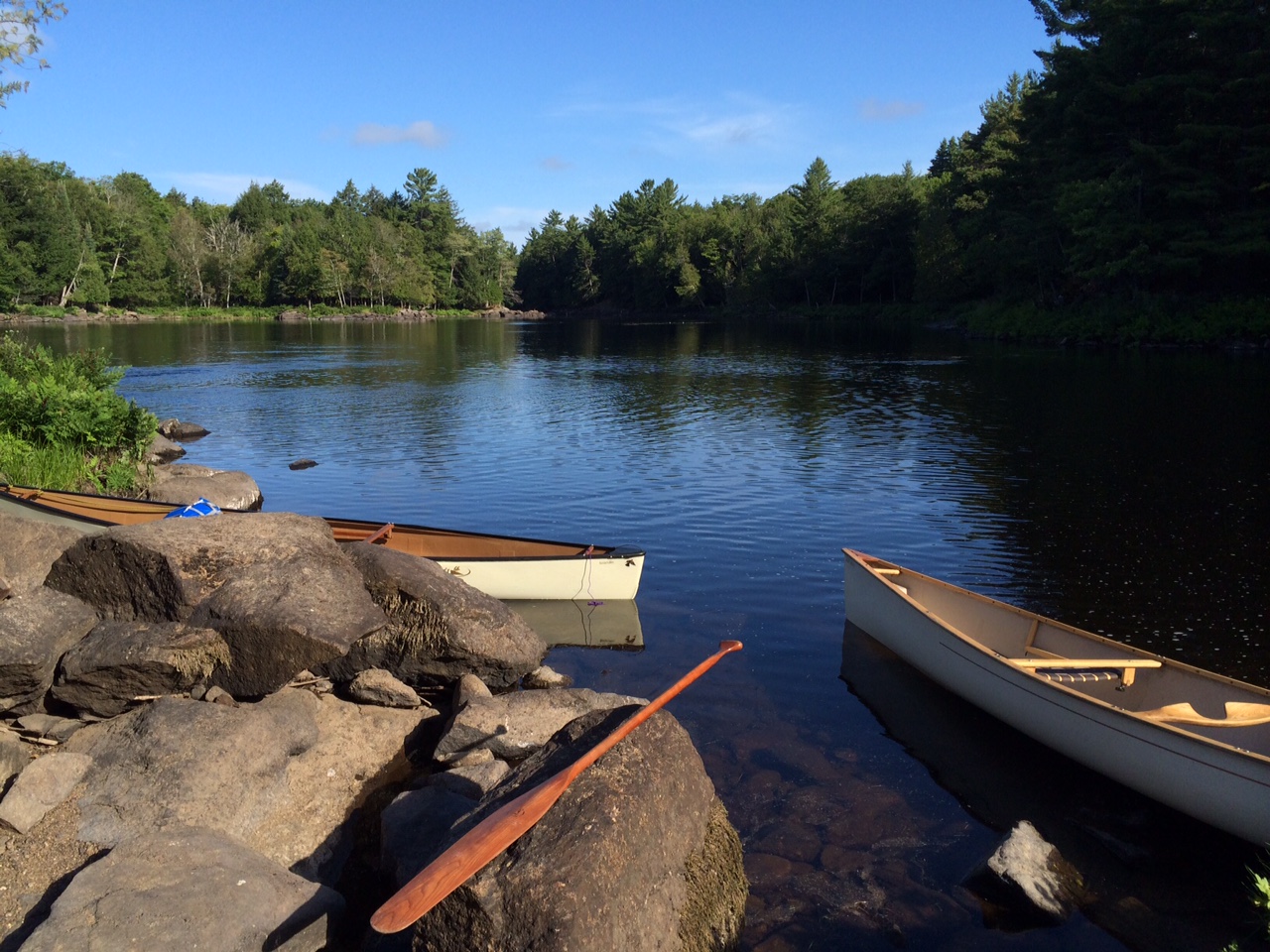 My co-adventurer for this trip was my friend and avid paddler, Rory. After leaving my car at our take out point on Maple Island, we carried our canoes just downriver of Knoepfli Falls, less than 10 km from the town of Magnetawan. We decided to each paddle a boat solo and make the trip a little more challenging. As I settled into position and shoved off from shore, the sun was shining and I was excited to see what this beautiful waterway had in store for us.

The Magnetawan River flows almost 175 km from its headwater in Magnetawan Lake in Algonquin Park through the Almaguin Highlands and all the way to Georgian Bay. There are five lakes accessible from the river, including Ahmic Lake and Lake Cecebe, and it is possible to boat more than 60 km of river between the towns of Burk’s Falls and Ahmic Harbour. In the late 1800s the river was used to transport people and freight westward, forming the backbone of a land and water route between Burk’s Falls and Parry Sound. Prior to the dawn of the 20th century, the addition of the locks at the town of Magnetawan and several dams along the river, including the dam at Knoepfli Falls, made this passage easier and served to draw an increasing number of tourists to the region. 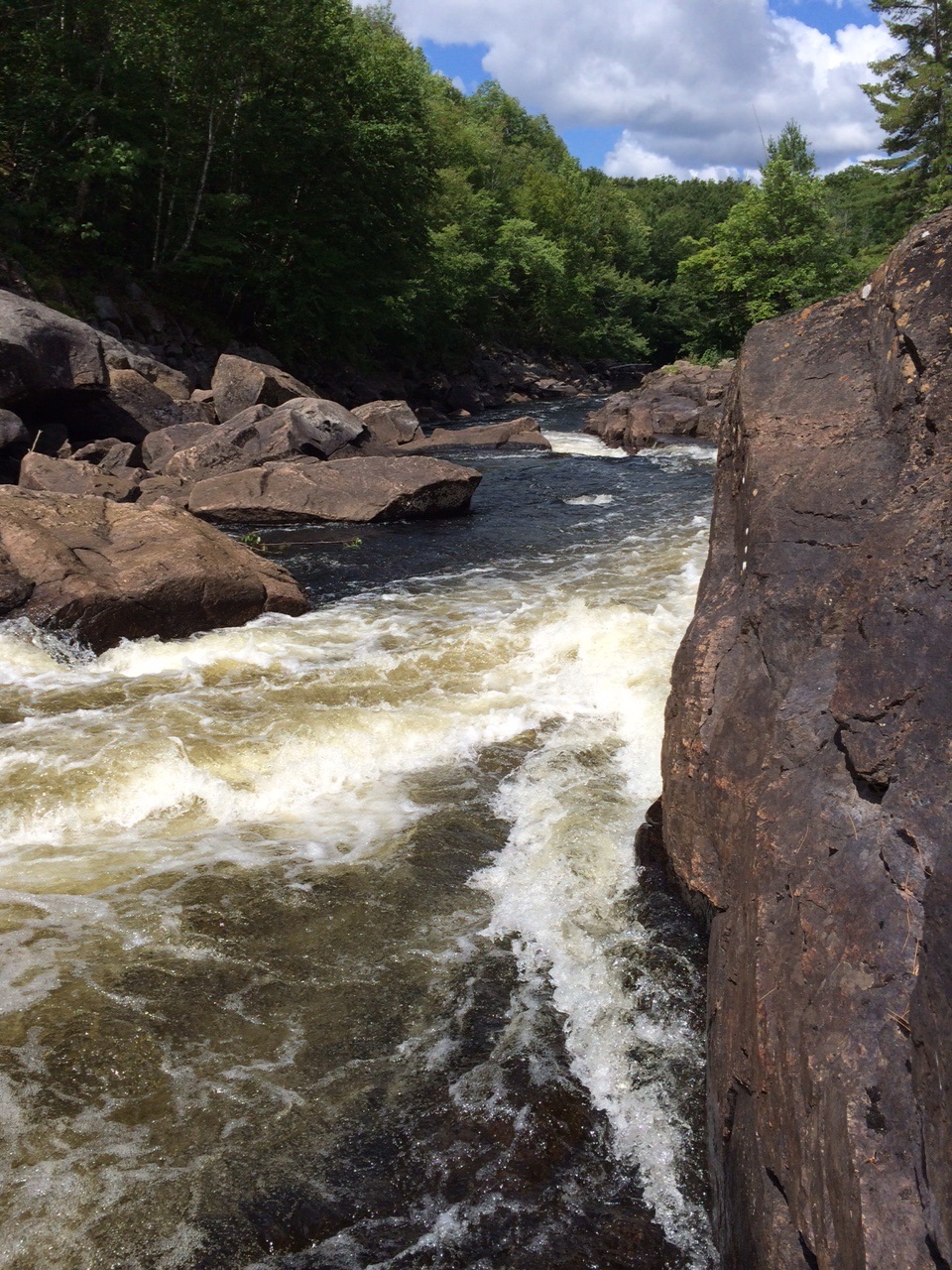 Heading out to experience the river for ourselves, we could hear the sounds of rushing water before we could see the first set of rapids. Being close enough to the highway that there were houses on both sides of the river, we simply chose a side and paddled to shore upriver of where the white water began. Hoisting the canoes onto our shoulders for the first of many portages, we proceeded to follow the shoreline around the rushing water. It wasn’t long before we were back in the boats and leaving civilization behind us. The water was cool and clear as it pooled around my paddle and flowed past the bow of the canoe. Soon the only sounds I could hear were of the surrounding wilderness, the songs of birds, the wind in the trees and the rippling of the river itself. While we had been paddling for barely an hour, I was amazed to discover it felt as though I was deep in the wilderness. The solitude settled upon me and the worries of my busy life floated away as if carried on the water itself.

Yet it was the river itself that brought us back to reality, as each new set of rapids brought unique challenges. It is the nature of a river that, where the passage narrows and the banks grow steeper, the water runs faster. Unfortunately for us, that also meant that we had to travel those same steep banks with canoes on our shoulders to safely continue our journey. More than once we were forced to back track, to find a way around a rocky passage or push through a dense barrier of trees.

We stopped for a quick shore lunch at what I thought was the midway point of the journey. Brief flashes of civilization would appear, where local roads passed close to the river’s banks, but an overall sense of seclusion prevailed. A headwind slowly picked up speed as the afternoon progressed and my muscles grew increasingly fatigued. Thanks to 21st century technology, the GPS navigation system on my phone indicated that we were nearing our return destination, Maple Island, and the small community that bears its name.

While heading for Maple Island, my eyes turned to something else I had been searching for the entire day. I saw a cliff face that looked both climbable and appeared to be well suited for jumping off of into the river. I paddled to the base, checked that the water depth was sufficient to jump safely, and climbed eagerly to the top. Before Rory even realized I had stopped following him, I was airborne and had plunged into the cool water of The Mag. 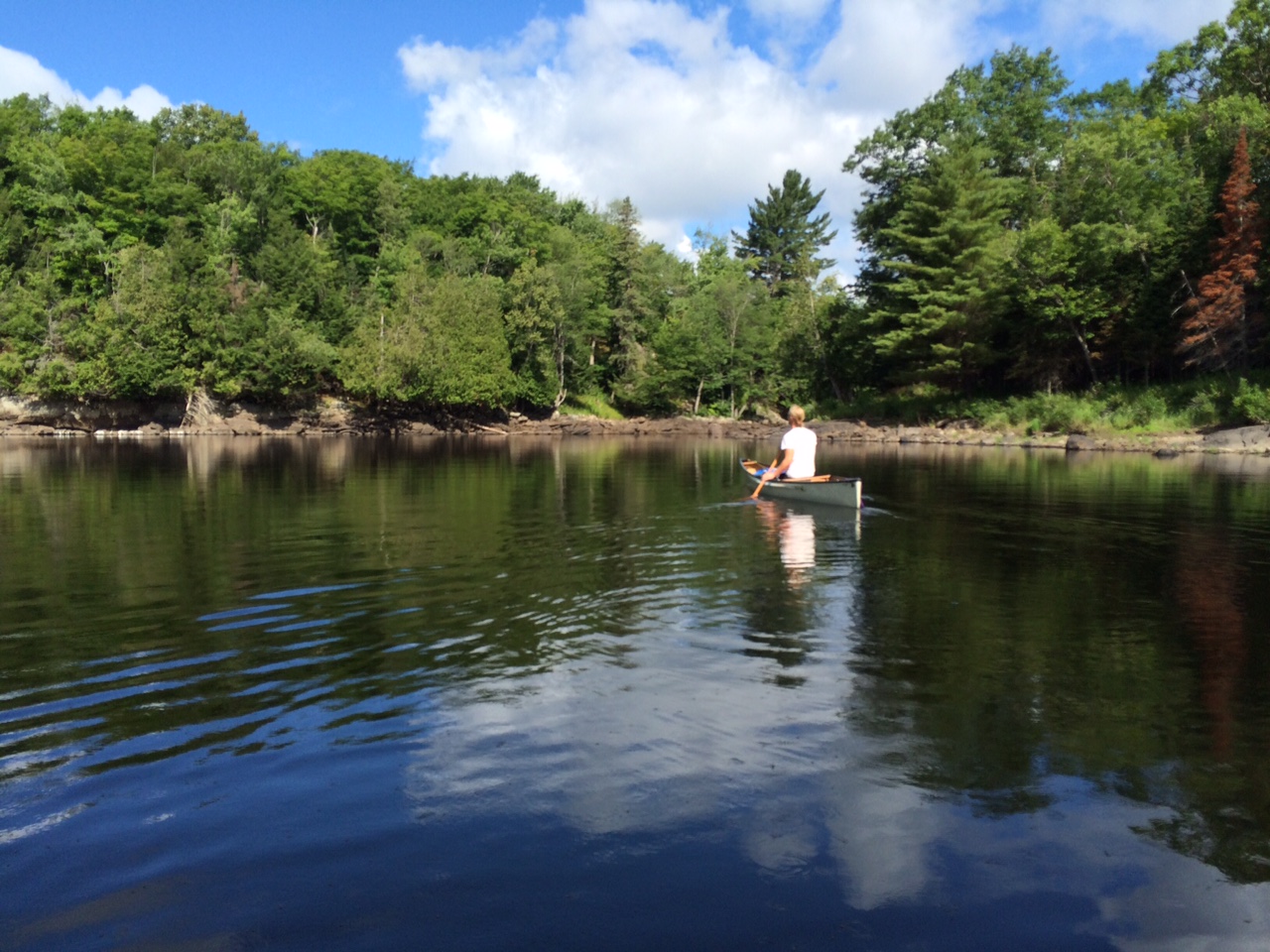 With arms and shoulders weary from a full day’s paddle and portage, we arrived at our destination. Knowing that this was the last time I would hoist the canoe on my shoulders this day buoyed my spirits. After an impromptu geometry and physics lesson involving strapping two canoes to the roof of my car, we were headed back to Knoepfli Falls and Rory’s own vehicle.

The route that had taken us over eight hours of paddling and portaging to complete was traversed in a mere 20 minutes by car. Even before I got home, my mind started considering a return trip to the Magnetawan River – and what better season to do some paddling than fall, when the brilliant fall colours are reflected in this already stunning waterway.

PUT IN AND TAKE OUT POINTS

I parked my car on a tiny road beside the dam at Knoepfli falls.  I followed Hwy 520 north from Magnetawan to Highway 124. I turned west on Highway 124. A little less than 5 km down 124 you come to the bridge that crosses the river at Knoepfli falls. I parked south of Hwy 124 on the east side of the highway bridge beside the dam. Google Maps calls it Tilson Creek Rd. We then followed the river north of the highway and put in at the end of the falls rapids. We proceeded to paddle north-west on the river, following the direction of the current.

At the town of Dunchurch, Hwy 520 heads north. In approx 6 km you will find Maple Island Rd. We parked my car and took our canoes out at the second bridge (the one that heads back off of Maple Island itself.)

To plan your stay in the wilderness just north of Toronto, click here.

Guest Blogger: Bill Farnsworth
Bill Farnsworth is a freelance writer who has lived in Muskoka for more than 30 years. When not writing, Bill can be found cycling, running, paddling and trying to keep up with his two adventurous boys.

Winter Spotlight on the Great Canadian Wilderness North of Toronto

Thank you for your interest in the Fuel & Fun Winter Travel Package. Program registration is now closed.…

While the Great Canadian Wilderness region is famous for its stunning lakes and rivers, it’s usually the views…