Writer and motorsports fan Martin Lortz reports back on his recent adventure on the rugged trails in the Almaguin Highlands of Ontario at the annual Spring Poker Run.

Stretching across the northern reaches of Muskoka, Ontario, from the western edge of Algonquin Park to the shores of the Georgian Bay, is a stunning region referred to as the Almaguin Highlands. Already renowned for its ATV riding along the Park to Park Trail system (230km of multi-use trail connecting Algonquin and Killbear Provincial Park), it’s the area east of Hwy 11 that has piqued my exploratory interest for a long time. 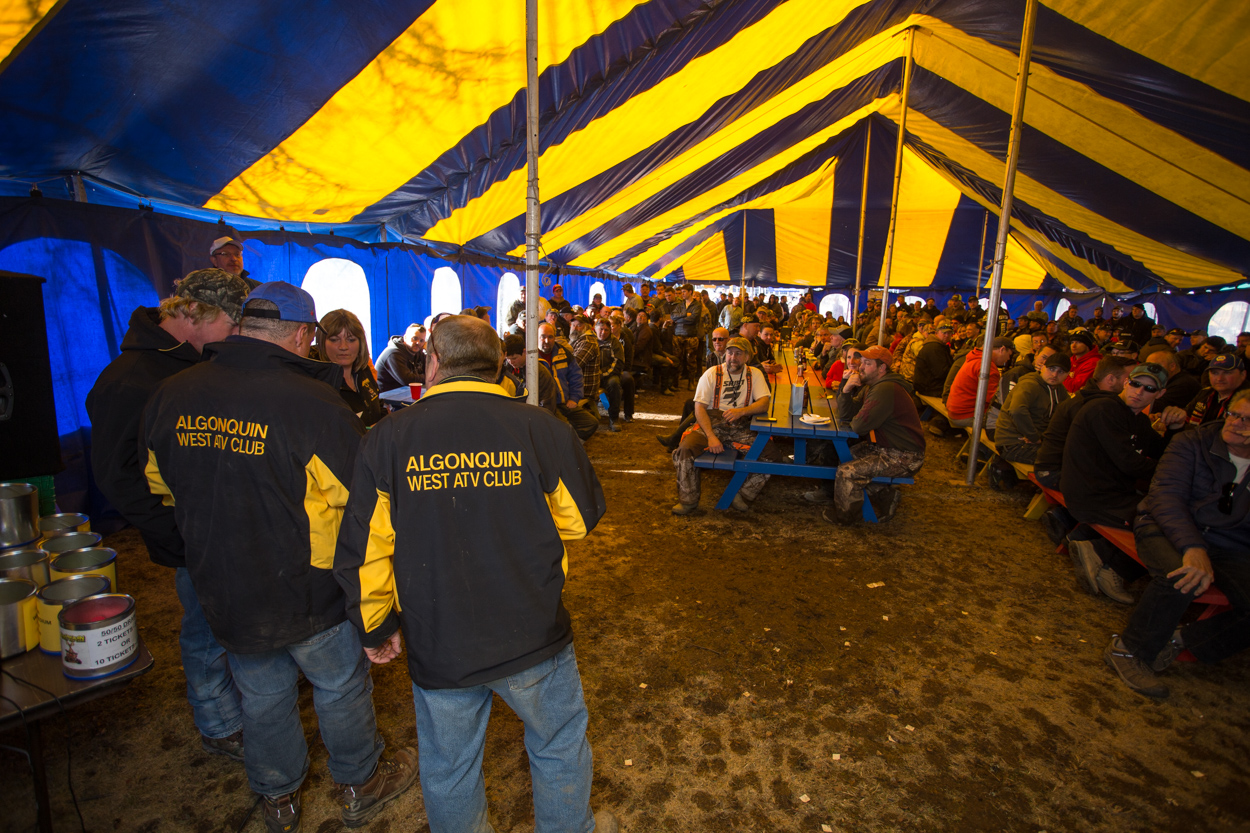 When I heard that this is the home turf of the Algonquin West ATV Club, I immediately turned to my friendly search engine to get more information. What I learned: 300+ members and an equal amount of kilometres of trail to explore!  Not only that, I took note that their annual Spring Poker Rally, featuring live music, food, 400 plus ATVs and awesome trails was just around the corner. And just like that, I signed up to take an epic – and unique – adventure in the Almaguin Highlands on Saturday, April 23, 2016.

This popular event, which heralds the spring and summer riding seasons in this part of Ontario, has seen steady growth over its eight year existence. Supported by numerous local businesses, it is hosted at the beautiful Edgewater Park Lodge, a resort which, like all the resorts in the area, has embraced ATV  tourism by offering special Stay ‘n’ Play packages as well as access to the trail network from their front doors. 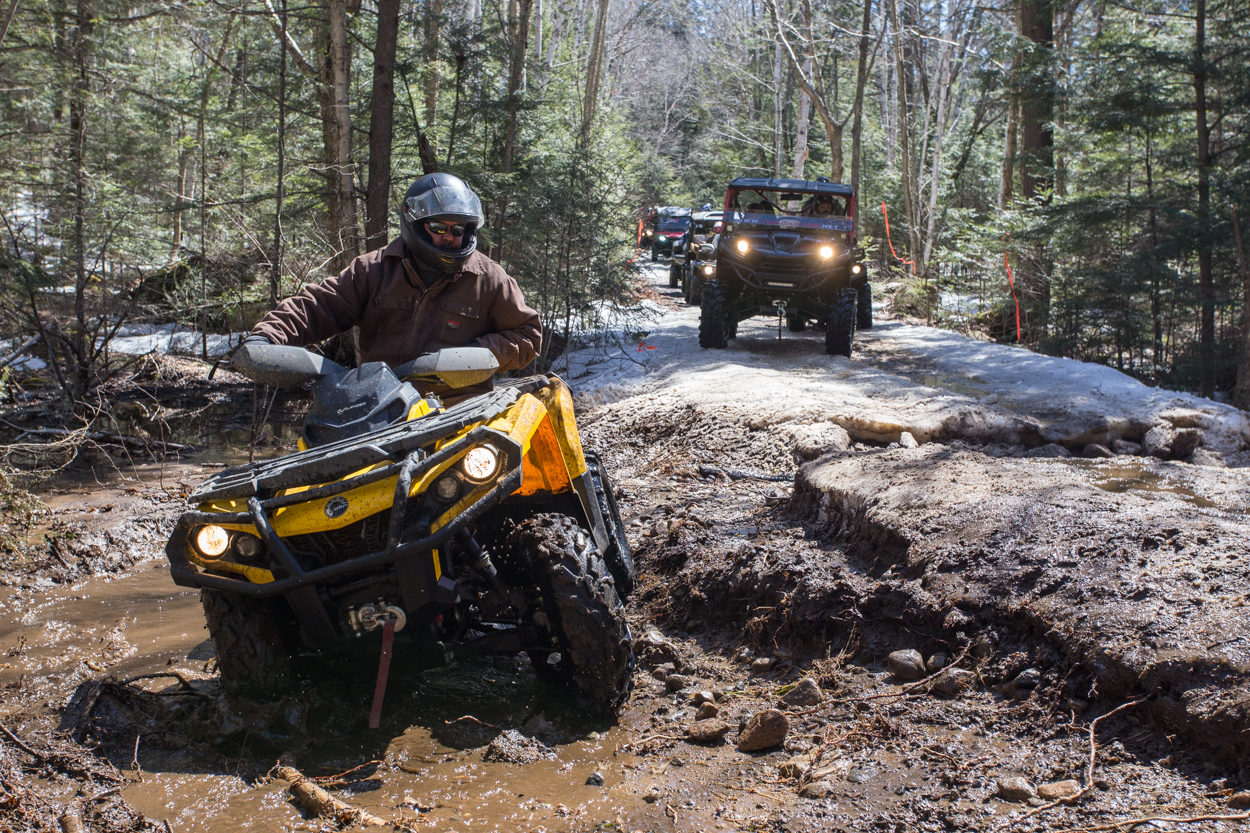 When you arrive for the Algonquin West ATV Club Spring Poker Run, the first order of business is to get in line with a few hundred like-minded motorheads who are registering. Next is a shuffle of the poker card decks and the laying down of the rules. Formalities out of the way – it’s rally time!   The scene comes alive with the rumble of engines, as a steady convoy of ATVs and side-by-sides disappear into the forest. You would think this many machines would be a formula for a traffic jam in the woods, but surprisingly that’s not the case. Sure there are a few slow spots, and helping hands are offered to those that get in too deep, but soon the convoy stretches out across the trail and over a steady supply of mud, rocks and lingering snow. The 90 kilometre loop stretches gas tanks well into reserve, but in true ATV fashion, nobody gets left behind (and notably the after party doesn’t start until the last machine rolls into camp.) 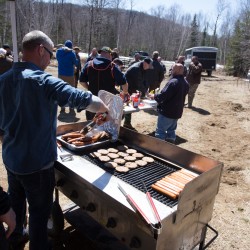 As I reflect now on the day’s events, the awesome trails, the good company, and the amazing job by all staff and volunteers to make an event of this magnitude run buttery smooth, there is one memory that seems to particularly stand out – the food! Maybe it’s the fresh air and the hours on the trail, but the organizers provided some of the best event food I can remember ever enjoying. The day started with a breakfast sandwich of eggs, bacon and cheese on a kaiser (delicious); the trail side lunch BBQ was awesome; and dinner showcased some amazing shepherds pie, homemade soup, salad and at least half dozen dessert options. Kudos to the chef!

At the end of the Algonquin West ATV Club’s Spring Poker Run, you see hundreds of smiling faces, her tons of laughing as stories of the days riding are retold. If you enjoy adventures out on an ATV, trust me, you will love this event, and be sure to register for the club’s Fall Rally that’s scheduled for September 26, 2016.

Coming soon in June – book your getaway to the Parry Sound area for another great ride – the annual “Do It For Dads” ride across the Park to Park Trail on Saturday, June 18, 2016.

For more information on the Almaguin Highlands of Ontario, click here.  To plan your stay, click here.

Guest Blogger: Martin Lortz
Martin is a freelance photographer and writer specializing in the outdoor lifestyle. Whether he is covering power sports or family-oriented pursuits, his passion for capturing the beauty of nature and the people who partake in it is evident in his work. His photos and articles have appeared in magazines such as Ski Canada, Explore, Bike, Mountain Life, Snow Goer,Kayak Angler, and Family Camping.